The mortuary tower of Chilpyk 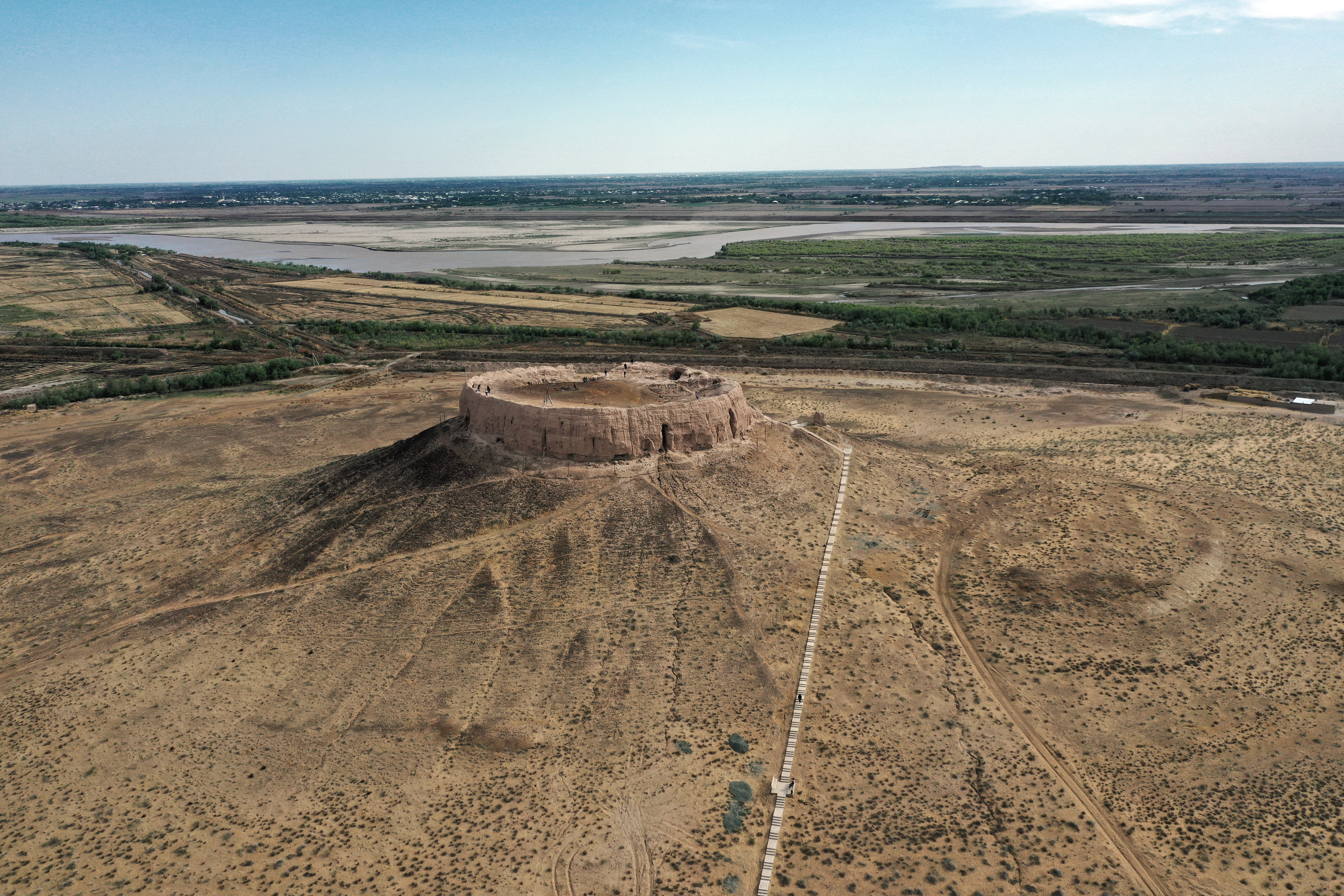 The mortuary tower of Chilpyk

The mortuary tower of Chilpyk, erected in the 2nd – 4th centuries A.D., at the turn of historical eras, belongs to the period of prosperity of the Zoroastrian culture in the Ancient Khorezm.

In the 9th – 11th centuries, it was used by the local communities as a beacon.

The monument was first explored in 1940 by the Khorezm Archaeological and Ethnographic Expedition of the Academy of Sciences of the USSR under the leadership of S.P. Tolstov, and was preliminarily identified as a mortuary tower, or dakhma, by the functional purpose.

In the plan view, Chilpyk has the shape of an open, slightly oblate circle with the diameter of approximately 65 to 79 m. The walls reach the height of 15 m in some places, and were made from pakhsa (rammed clay) blocks each having 0.8 to 1.05 m tall. The width of the tapered walls at the top is 2-3 m, while it is 4.8 to 5.5 m in the lower part. The external wall surfaces form an 80 degrees angle to the base.

A rock protrudes from the middle of the internal platform. The space between this rock and the wall is filled with sand and clay right to the top of the rock. The thickness of the sand and clay mixture is divided into horizontal strata, and, vertically, the sand fill is divided by baffles or small radial walls, made from bricks of antique dimensions (40x40x10 to 11 cm).

Between the two sides of the wall open ring, there are the remains of a staircase, approximately 20 meters long, which should have had about 75 stairs. In front of the first step, some remains of a ramp can be traced which could be 1.25 m long. Next to this staircase, there was also an underground entrance in the form of a long tunnel, about 22 m long, made directly under the rammed clay wall. Nowadays, it is also wrecked. Besides, on the internal part of Chilpyk tower, U-shaped (in cross-section) ceramic troughs were laid right at the base of the walls. The length of the best preserved one of these is 77.8 cm, the height is 9.5 cm, the width is 16.2 to 18.5 cm. These were obviously used as the gutter for rain drainage and melt water runoff.

The pottery shards discovered to have been there by the time of the construction of the walls, has a banded glaze on top of red engobe and can be dated to the first centuries A.D.. This dating also corresponds to the dimensions of the adobe bricks in the masonry of the walls, especially the signs, or tamga, found on them in the form of fingerprints, which is typical of antique bricks.

In preparing documentation for this Site, the following items were collected:

• aerial flyover footages, making a complete presentation of the scale of the monument and its context;

The results that we have at hand include:

• a detailed orthophotomosaic and a 3D-model of the territory of the monument, where it is possible to discern architectural, infrastructural, utility and other details by simple visual examination;

• a digital elevations model (DEM), which allows for a most complete assessment of the features of the urban and natural landscape, and for obtaining a detailed topographic map of the area;

• detailed 3D models of the architectural objects, fully transmitting the entire spectrum of the visual perception of the site in general and its individual elements (documentary true-scale accuracy of sh`ape and geometry with georeferences, high-resolution texture enabling the researcher to visually appreciate the condition of the tiniest details).