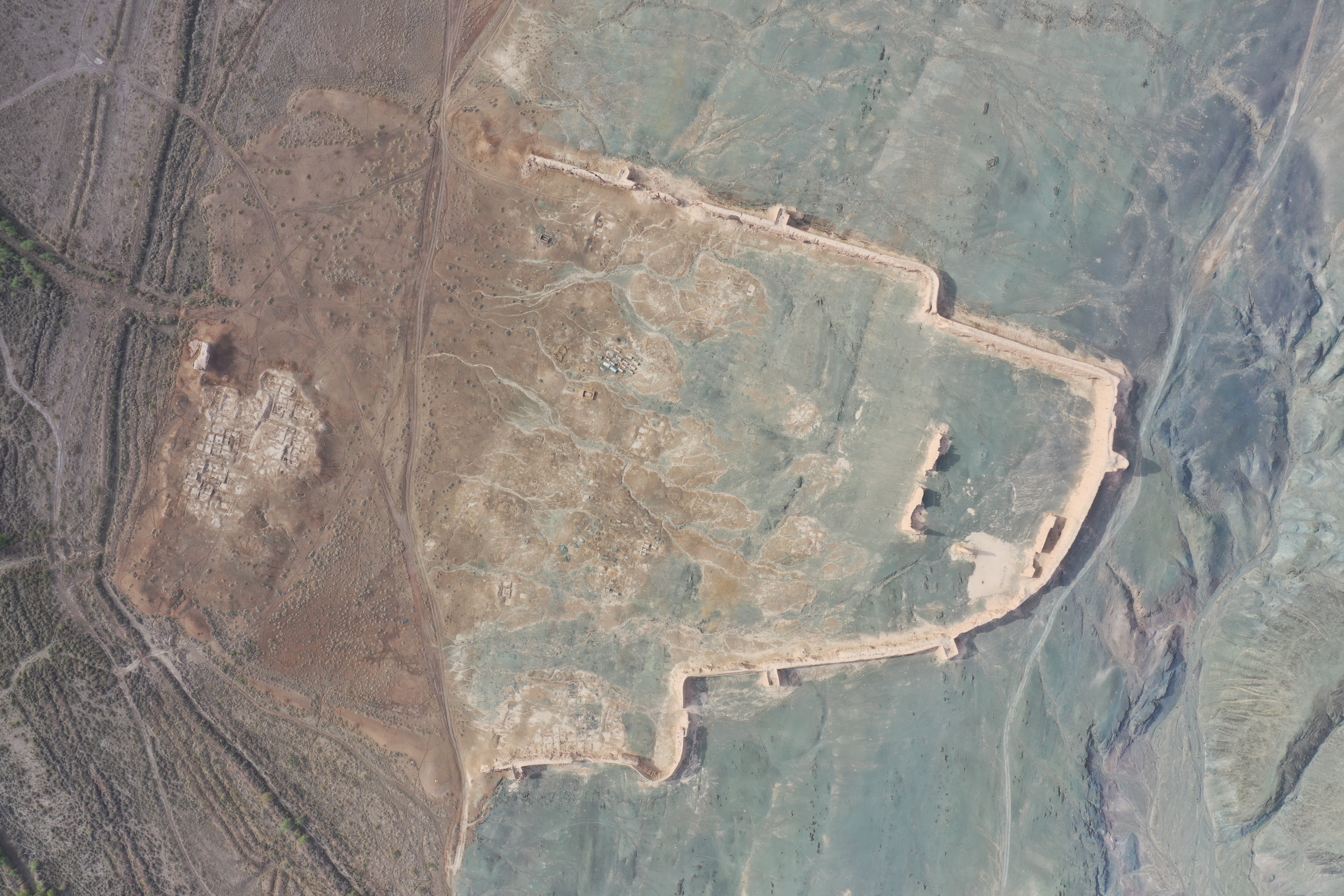 Jampyk-kala, (uzb. Жампық қалъа). Dating: the foundation of the settlement dates back to the 4th-3rd centuries BC; 4th, 9th-11th, 13th-14th centuries AC

The settlement has a complex configuration, not caused by the terrain. The maximum length is 420 m, the width is 288 m. The northern wall is straight, with two bends. The western part of the monument was destroyed by the floods of the Amu Darya. The walls reach a height of nine meters and are built of pakhs blocks. The thickness of the walls at the base is 5.6-5.8 m, at the top 3.4-3.6 m. The wall surfaces have an inclination to the base: on the outer side - 79°, on the inner side - 87-88°.

On the top of the walls there was an open shooting gallery 2.8-3.0 m wide, protected from the outside by a parapet up to 0.6 m wide. The ascent to the shooting gallery was carried out by stairs made directly on the inner surface of the walls due to their expansion. 6 towers of a truncated-conical shape have been preserved, spaced from each other by 70 or more meters. A parapet runs along the edge of the towers. Only in the tower on the eastern wall there is a tower room inside, the rest of the towers are solid.

There were probably two entrances. One of them was located in the northern wall and served as an exit to the cemetery. It was fenced off from the side of the Amu Darya by a stone dam about 84 m long. The second gate could be located in a bend on the south side.

Archaeological excavations made it possible to clarify the chronology of the settlement. The oldest pottery dates back to the 4th century BC. – 1st century AD. A more numerous group is made up of ceramics dating back to the 9th-11th centuries, when the citadel and the walls surrounding it were built. The date of the last habitation is determined by a silver coin of 719 AH (1319-1320) and bronze coins of Janibek 746 AH (1345-1346) and 748 AH (1347-1348).

During the excavations, numerous finds were discovered, previously brought from various countries of the East and West (China, Egypt, Russia, Europe, India).

The studies were carried out in coordination with University College London with the full support and assistance of the National Commission of the Republic of Uzbekistan for UNESCO, as well as the khokimiyats of the regions of Karakalpakstan. More than 900 aerial photographs and videos, as well as various geodata, have been collected during the research, which allow visually recreating the settlement accurately, measuring and studying the topography of the area, making cartography and assessing the state of conservation of the monument.