The eighth site in the Heritage of Karakalpakstan collection of IICAS publications in the social media. 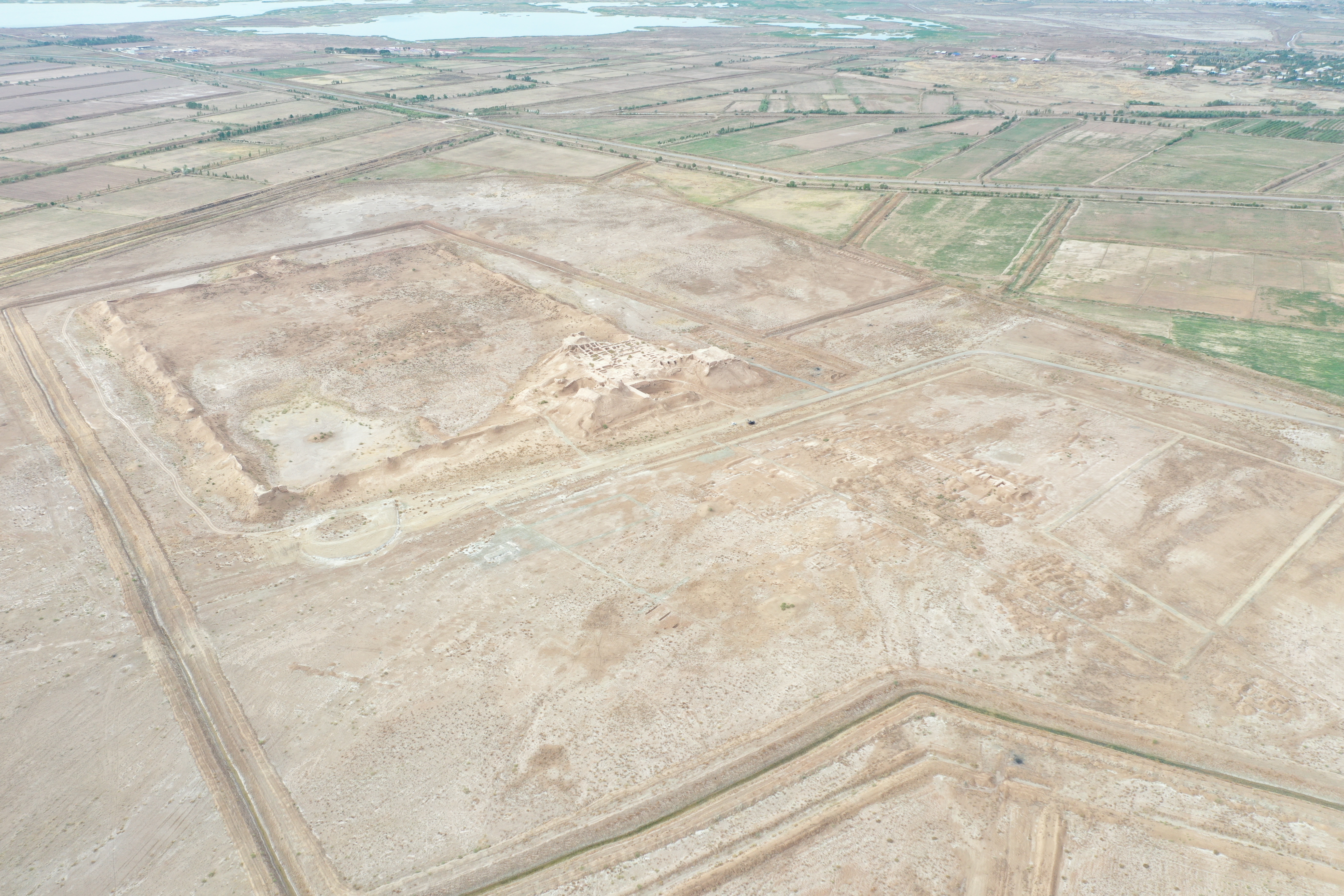 The eighth site in the Heritage of Karakalpakstan collection of IICAS publications in the social media.

The eighth site in the Heritage of Karakalpakstan collection of IICAS publications in the social media, – Toprak-kala, (Uzb. Toprak kal’a), dated to the 1st-5th centuries CE; 6th century CE.

The entire archaeological complex of Toprak-kala included several palaces and a shahristan – a residential area for the housepersons and attendants of two royal temples or palaces. But the residential buildings occupied only a minor part of the shahristan.

The archaeological site covers an area of 500×350 m. Rectangular in plan, it is surrounded by a wide moat and fortress walls 8–9 meters high, equipped with numerous quadrangular towers with rounded corners. The entrance to the settlement was designed as a complex structure in front of the gate, from which a central street, about 9 m wide, ran through the entire shahristan to the citadel.

The High Palace. The main body of the palace, having the shape of a truncated pyramid, was built of adobe bricks, its facades decorated with a system of vertical ledges and recesses. Over 150 halls and rooms of the sacred palace were discovered, profusely decorated with murals and sculptures. The true height of the palace was calculated to have reached a whopping 40 meters. The central volume of the palace combined a two-level and a three-level sections. The palace housed dozens of chambers. The floor area of this monumental edifice was 120 hectares.

The most important shrine is the Dancing Masks hall, the Anahita Temple, intended for mystery performances. Partially preserved on its walls are images of men and women dancing in pairs. This is a typical fire temple: an altar in the center and four columns surrounding it – the chortag. An altar podium was discovered in the center of the hall.

The Kings’ Hall is a dynastic shrine where a fire was burning on an altar in front of 23 large images of Chorasmian kings (unlike some others, these sculptures were modeled in full).

The Hall of Victories – On the walls of this hall are bas-reliefs of solemnly sitting kings, with goddesses hovering near each of them.

The Warriors Hall – Numerous figures of kings were placed in niches of the walls under the ram horns sculptures (the symbol of heavenly fire).

The Deer Hall - A hall for the ritual festival of rewarding the gods, or thanksgiving.

The Northern Palace Complex consists of ruins of buildings located outside the Toprak-kala archaeological site, approximately 100 m north of the palace on an area of about 12 hectares. One of its buildings consists of 50 rooms with polychrome murals made as ornaments on the white or black background, images of large and small rosettes, flowers, as well as remains of a sculpture consisting of the lower part of the legs and the dress.

The most significant findings are the ancient Chorasmian documents, the latest of which are dated to the years 188 and 252 of the Chorasmian era (the early 1st century CE).

In the early 4th century, the walls of the shahristan were rebuilt, the palace was transformed into a citadel. By the 5th century, Toprak-kala had lost its official significance.

This site was discovered in 1938 by S. P. Tolstov. The first exploratory excavations were carried out at the settlement in 1940 and lasted until 1992.

The research was carried out in coordination with the University College London, with all-out support and assistance from the National Commission of the Republic of Uzbekistan for UNESCO and the regional administrations of Karakalpakistan. In the course of the research, more than 7,400 aerial photographs and videos were collected, along with various kinds of geodata, which enable researchers to engage in accurate visual reconstruction of the site. The datasets made it possible to measure and simulate the topography of the site areas, to complete its mapping, and assess the state of preservation of this site.