The component sites of the Republic of Tajikistan of the Zaravshan-Karakum corridor are located in the upper part of the Zaravshan River, within three districts of the Sughd region, which фдыщ reflect the historical regions of Penjikent (historical Panjkat) in the west, Ainin district (historical Pargar, Falgar) in the center and the Gorno-Matchinsky region (also known as the Kuhistoni-Mastchohsky region) in the east (Isakov et al. 2020, pp. 9-13). The larger part of the Penjikent region is a wide terraced loess valley between the western ends of the Trans-Alai system mountains, including the Zarafshan ridge from the south and the Turkestan ridge from the north. This is a fertile land, culturally attributable to Sogdiana in the early Middle Ages with the center in Samarkand, which being close to highlands had a relatively cooler climate. In the upper reaches of the Zarafshan valley, there are 4 constituent parts of the Great Silk Road: the Zarafshan-Karakum corridor (fortress Tali Hamtuda, mausoleum of Khoja Muhammad Bashoro; Sanjarshah settlement and ancient Penjikent settlement in the Penjikent region). The routes in the area were accessible for wheeled vehicles (depicted in the frescoes of Penjikent), bridges (documents from the castle on Mount Mug mention checks for passing bridges) and archaeological sites demonstrate deep integration with the culture of Samarkand Sogd in the west. Tali Hamtuda Fortress is a complex of ancient fortresses and settlements with a Muslim cemetery next to it. The mausoleum of Khoja Muhammad Bashoro is a rare example of the evolution of Muslim architecture, nurtured on the local traditions of architecture.

The site of Khisorak is located at an important crossroad: the route to Garm leads south along Valgun, the route to the north through Sabakh, the route west through the valley to the lowlands of Sogdiana (Lurie, 2019). The late medieval fortress Sarvoda controled the passes along the Fandarya in the direction toward Varzob or Iskandarkul. Sanjarshah protects the highway leading from Penjikent to the mountainous part of Zarafshan, as well as the highway leading south to the Kashkadarya valley along the river Magiyandarya.

Latitudinal ties between Samarkand, Penjikent and upper Zarafshan have never been completely severed. They were most noticeable in Penjikent – the most important and best studied archaeological site of the region, which dates back to the 8th century. They are associated with the activities of Divashtich, the last independent ruler of Penjikent (706 - 722), fully reflected in his archives, found in the castle (Abargar) on Mount Mug. The texts mention more than a dozen settlements in the mountainous part of the Zarafshan Valley, the Penjikent oasis and the area southeast of Samarkand (Smirnova, 1961).

Six components of the Tajik section of the Great Silk Road: the Zarafshan-Karakum corridor, namely, the settlement of Hisorak, the castle on Mount Mug (Abargar), the Qum settlement, the mountain residence of the ruler Gardani-Khisor, the ancient city of Sanjarshah, the ancient city of Penjikent, were part of a single political and economic systems at the beginning of the 8th century.

The Toksankorez irrigation system, located in the Penjikent district of the Sughd region, is the best-preserved water supply gallery in the Zarafshan river basin. The korezs of this area differ from the kariz or kanat systems in Iran or in the Turpan oasis (inscribed on the World Heritage List): it is not an underground canal coming from the foothills, but a gallery-like canal dug into the rock, often along an edge of the cliff, so that the water for irrigation was passing through the natural obstacles. The object is an outstanding evidence of human interaction with the environment and an example of an outstanding human genius expressed through creating a technically advanced system applied between the 6th to the 12th century and used until the 1930s. 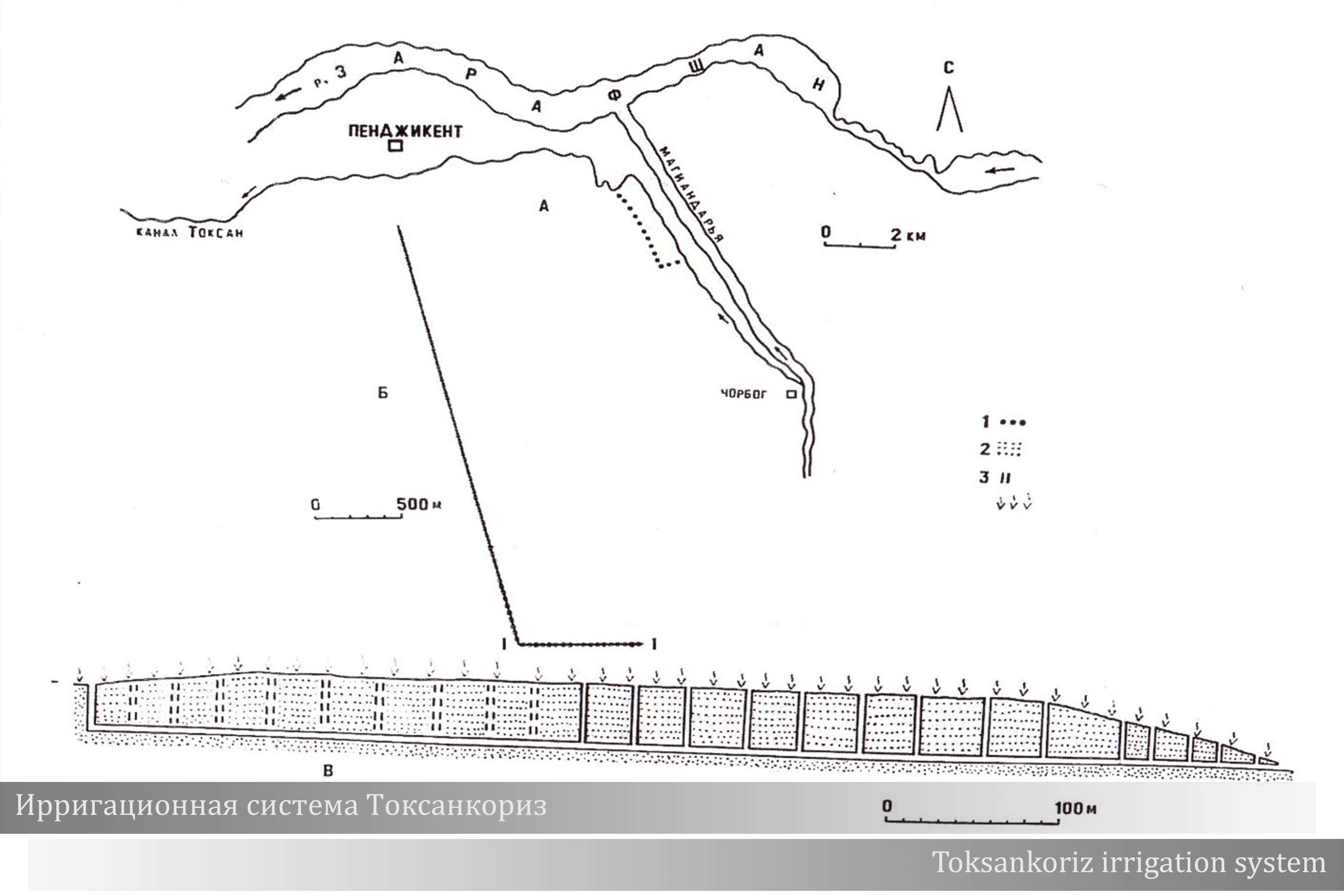